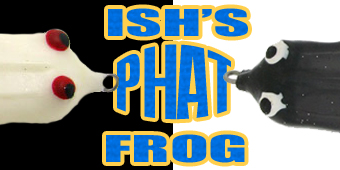 Does any bass fisherman need a reason to go frog fishing? No.  Especially if you suggest going frog fishing for an afternoon to try out a new bait.  That’s precisely what I did one day last summer to test out the Snag Proof Lures Ish’s Phat Frog.  The first frog I ever fished was the Snag Proof Original, I was 7 yrs old and fishing a pad field with a 6’ spinning rod and 10lb mono. I still remember the wakes pushing the pads aside as big bass swam beneath the bait and the first fish that blew up on that little bait taking it home with him.  Now I fish frogs with a Dobyns 745dx, 7.1:1 Chronarch E, and 65lb Power Pro and most fish that hit are coming for a boat ride.

Out of the package Ish’s Phat Phat Frog looked unassuming.  The Gamakatsu hooks were strong and very sharp, and I bent them out just slightly with pliers.

I liked the addition of a small rattle and the soft body.  After trimming the legs down like I do on all my frogs, it was time to get down to business.

The Phat Frog weighs about 5/8oz, so it casts well in all conditions and sits down slightly when coming over mats.  I was immediately impressed by how easily it walked compared to other frogs I have fished, nearly every twitch of the rod made Ish’s Phat Frog dance.  After several casts I decided to test out the “unsinkable” claim.  Snag Proof proudly touts that the Phat Frog has two sealed air chambers that negate the need to drain the frog every few casts.  Further, you never have to worry about the frog taking on water and spoiling the cast.  I must say that I fished this frog hard that day, and continued to use it all summer.  Not once can I recall having to squeeze water out between casts.

THE MOMENT OF TRUTH

There aren’t many days that I’ve caught numbers of bass of frogs.  This is typically a big fish technique, and you truly must make every strike count. The hook up ratio with Ish’s Phat Frog impressed me.  On this particular day the fish were eating the frog well, and those big Gammy hooks at the back really found their mark.  I believe that the positioning of the legs help to keep the skirt material from interfering with the hooks.  I also caught about a dozen good fish on one frog before the weight fell out of the rear end, so durability was sufficient.

I’ve read some criticisms about Ish’s Phat Frog calling it “ugly”, and I’ll agree, it’s not exactly work of art when compared to Koppers Live Target Frog. It also lacks the “badass” look of the Spro Frogs, but guess what folks…. THE FISH DON’T CARE.  I’ll take function over fashion any day (just ask my wife) and the Snag Proof’s Ish’s Phat Frog gets the job done.  Ish’s Phat Frog has become one of top three frog baits, and it’s often my top choice.  Snag Proof offers 17 colours for Ish’s Phat frog, but following Ish Monroe’s advice and stucking with Papa Midnight (black) and Da Man (white) made colour selection a breeze and I never found myself wishing I had another option.

If you haven’t tried Ish’s Phat Frog from Snag Proof Lures, I strongly suggest that you do.  The design, quality, and ease of use have made it a confidence bait in my bass fishing.

What Fishing Line Should I Use? 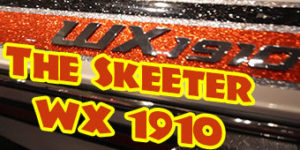 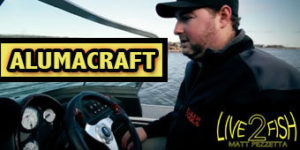